Vancouver, British Columbia – July 5, 2022 - Gold Royalty Corp. (“Gold Royalty” or the “Company”) (NYSE American: GROY) is pleased to announce that it has begun to receive royalty payments related to its Borden Lake net smelter return (“NSR”) royalty (the “Royalty”) over Newmont Corporation’s (“Newmont”) producing Borden Mine located in Ontario, Canada. Ely Gold Royalties Inc, a wholly owned subsidiary of Gold Royalty, originally purchased the Royalty on May 6, 2020. The Royalty included a five (5) kilometer area of interest (“AOI”) with a 0.50% NSR (the “AOI Royalty”) on certain claims within the AOI (the “AOI Claims”). (See Ely Gold press release dated May 28, 2020)

It has now been confirmed that mining at the Borden Mine (“Borden” or “Borden Mine”) is occurring on the AOI Claims and therefore Newmont has begun making royalty payments under the AOI Royalty. Gold Royalty has received approximately $1.4 million in royalty back payments. The AOI Royalty has been registered on the mining licence with the Ministry of Mining in Ontario.

David Garofalo, Chairman and CEO of Gold Royalty commented: “Borden brings another high-quality cash flowing asset into our portfolio. Along with the expected start of production at Beaufor this month, we will have eight royalties on producing assets and twenty assets in development supporting our industry leading revenue growth profile. As the former CEO of Goldcorp, I recall our team developing Borden as a next generation, environmentally friendly mine, and I am excited for Gold Royalty to now be a part of this asset as a royalty holder.”

The Borden Mine is operated by Newmont near Chapleau, Ontario as part of the larger Porcupine complex near Timmins. Described on Ontario’s Invest Ontario website as the “mine of the future”, Borden features state-of-the-art health and safety controls, digital mining technologies and processes, and low-carbon energy vehicles. In addition, Borden’s all-electric underground fleet eliminates diesel particulate matter from the underground environment and lowers greenhouse gas emissions. This helps to reduce energy costs, protect employee health and minimize impacts to the environment.

Notes to Mineral Reserves and Resources: 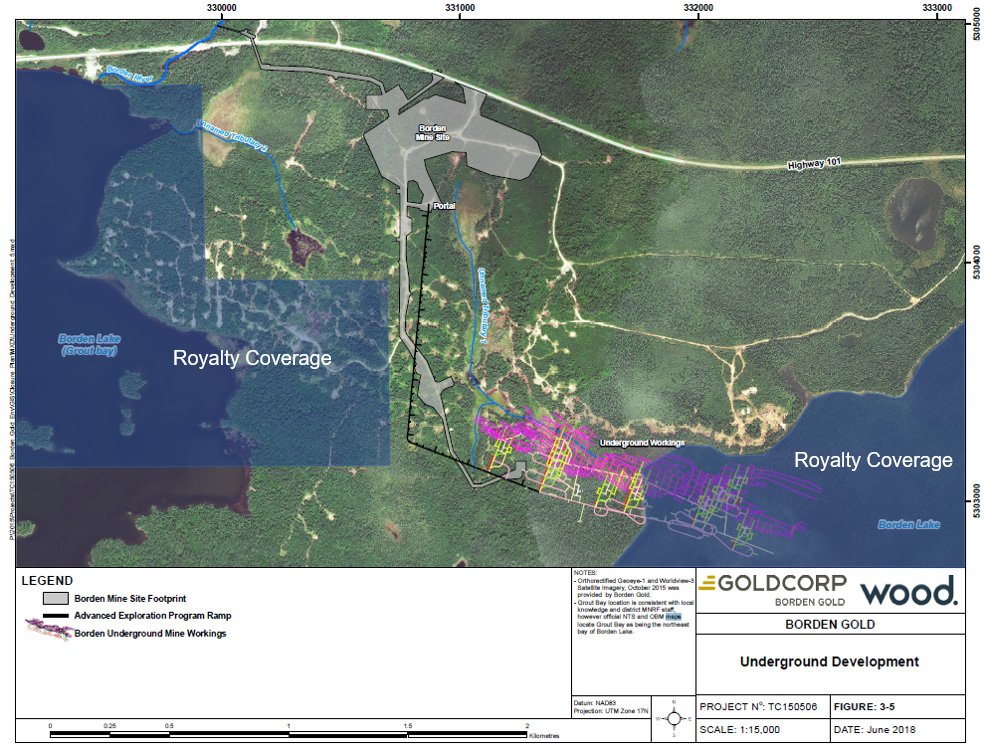 Figure 1: Surface image taken from the Borden Mine Closure Plan Report4 showing a projection of planned mine development. Underground workings are shown extending to depth to the southeast on the Company’s Royalty. Numerous drill pads located on the Company’s Royalty can be seen to the northwest of the mine development. An overlay (dark blue) has been added to illustrate claims subject to the Royalty.

Alastair Still, P.Geo., Director of Technical Services of the Company, is a "qualified person" as such term is defined under National Instrument 43-101, and has reviewed and approved the technical information disclosed in this news release.

Gold Royalty Corp. is a gold-focused royalty company offering creative financing solutions to the metals and mining industry. Its mission is to acquire royalties, streams and similar interests at varying stages of the mine life cycle to build a balanced portfolio offering near, medium and longer-term attractive returns for its investors. Gold Royalty's diversified portfolio currently consists primarily of net smelter return royalties on gold properties located in the Americas.

Except where otherwise stated, the disclosure in this press release relating to Borden has been derived from the Goldcorp 2016 Annual Report and other public information disclosed by the operator and has not been independently verified by the Company. Specifically, Gold Royalty has limited, if any, access to the property subject to the royalty. Although Gold Royalty does not have any knowledge that such information may not be accurate, there can be no assurance that such third-party information is complete or accurate. The Royalty does not cover the entire project area for Borden, or the areas covered by existing Mineral Reserve and Mineral Resource estimates.

Unless otherwise indicated, the technical and scientific disclosure contained or referenced in this press

release, including any references to Mineral Resources or Mineral Reserves, was prepared by the operator in accordance with Canadian National Instrument 43-101, which differs significantly from the requirements of the U.S. Securities and Exchange Commission (the “SEC”) applicable to U.S. domestic issuers. Accordingly, the scientific and technical information contained or referenced in this press release may not be comparable to similar information made public by U.S. companies subject to the reporting and disclosure requirements of the SEC.